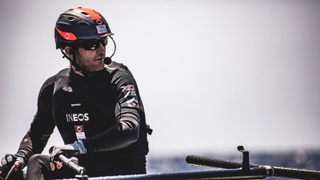 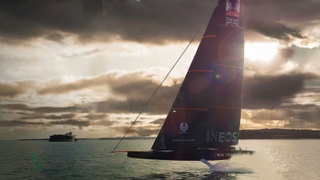 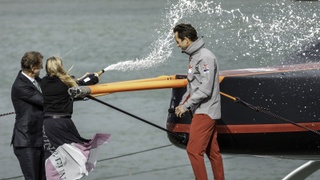 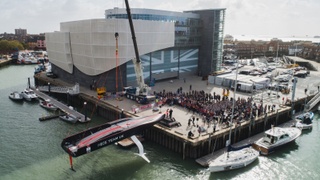 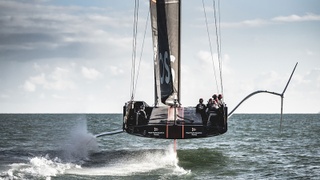 Sir Ben Ainslie on testing the new AC75 for INEOS Team UK ahead of the 2021 Americas Cup.

All four teams have now launched their new-generation America’s Cup boats, and we’re learning that operating the AC75 is a completely different proposition from handling even the AC50 – never mind the old IACC monohulls!

One of the many differences is that the process of commissioning (the handover from the build team to sailing team) starts long before the boats get anywhere near the water. It begins as soon as the hull is completed, with comprehensive structural tests. It makes sense to do these before the boat is fitted out with the rudder, cant arms, wings, flaps, rigging and all the hydraulic and electronic systems – if there is a structural problem it’s a lot easier to fix without all that stuff in the way. The component parts of the control system, electronics, hydraulics and the mechanical engineering are also tested before they go on the boat.

When the fit-out is complete, the boat’s control systems are put through more scrutiny. The loads and speeds are such that any failure is potentially catastrophic, and we need to be sure that everything is working as planned before we go sailing.

The final stage of commissioning is putting the sails up and going through everything one more time to check that it all works. Back in the day, with the IACC monohulls, this wasn’t much more complicated than a series of straight-line sailing tests. Each of them was done at a narrower wind angle than the one before, all with experienced structural guys downstairs listening for any unexpected creaks or bangs. It’s a lot more sophisticated now but there’s still the same level of trepidation as you sheet on for the first time, accelerate and load the boat up.

The divergence from the old boats continues even when commissioning is complete, as the teams finally get into performance testing. The Protocol for this America’s Cup has forbidden us to sail more than one AC75 at a time. This means it’s illegal to use the old testing regime: lining two boats up beside each other and sailing – as fast as possible, but with both boats constrained to a straight-line either upwind or downwind – for 10 minutes at a time. The idea was that the boats were sailed close enough together so that over a series of tests the input power from the wind would average out and be equal for both boats. And the performance was directly revealed by the winner of the test.

It wasn’t perfect, but now we don’t even have this method so we have to devise ways to test productively with just a single boat. Fortunately, emerging technology has made this possible, both with new sensors and new analysis methods, courtesy of the era of big data. This means lots of new testing techniques. The most fundamental part of this is to corroborate the predictive or modelling tools that we use to design the boats. The more confident we can be in those tools, the more we can follow their guidance and try to improve performance.

The basic building block of modern naval architecture is the VPP, or velocity prediction program. It builds a model of the forces on the yacht using first principles of physics. Some of these are “lift” components that push the boat forward and some are “drag” components that hold it back. When those force vectors are summed up (at a particular wind speed and course) the VPP will predict a speed and apparent wind angle for the yacht.

The VPP is fed by predictions from our engineers using computational fluid dynamics programs. The VPP also feeds into our simulator – so the sailing team can sail the “boat” using a motion platform and virtual reality headsets – along with higher-level race simulations that take into account manoeuvring, course boundaries, wind patterns and so on. The more accurate we can make the information coming from all of these, the faster we will go.

It’s the job of our performance team and their testing programme to give us that confidence, and it’s all very different – but in many ways more interesting – than just repeating the same 10-minute straight-line test over and over again