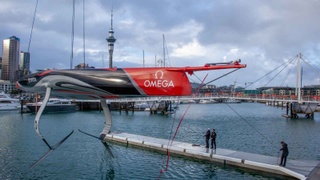 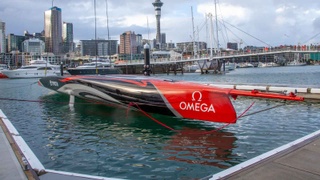 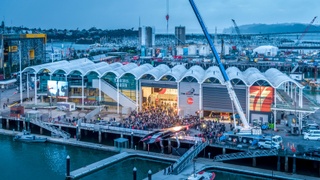 Emirates Team New Zealand have launched their first AC75 monohull at their team base in Auckland.

The reigning America’s Cup champions are the first of the five challengers to launch the new generation of AC75 foiling monohulls that will be used in the 36th America’s Cup. The 24 metre yacht has been christened Te Aihe, meaning 'dolphin'.

Emirates Team New Zealand COO Kevin Shoebridge said, “This is a significant occasion for the team, not just because it is another new boat, but because when we won the America’s Cup in 2017 we very quickly had to come up with a new concept of boat that would continue to push the boundaries of innovation and technology in the America’s Cup.

"In the relatively short timeframe since November in 2017 when we published the concept, to seeing it in the flesh today is an amazing testament to the entire team willing to push things all the way from concept to design to build and fit out.”

Unlike many other challengers, Emirates Team New Zealand developed their first boat with an in-house simulator, while others have opted for smaller scale prototypes to test their concept on the water. Over the coming months, the team will test their first AC75 on Auckland’s Hauraki Gulf, on the east coast of New Zealand’s North Island, where the final fleet of five boats will be competing in March 2021.

The five challengers are Emirates Team New Zealand, Stars and Stripes Team USA, American Magic (US), Ineos Team UK (GB), and Luna Rossa (Italy). The Malta Royal Yacht Club and The Royal Netherlands Yacht Club were accepted as challengers by have since withdrawn.

Head of Design for Emirates Team New Zealand, Dan Bernasconi, played a central role in the development of the 2021 America’s Cup AC75 Class Rule before turning his attention to New Zealand’s boat. He says the new rule was designed to push development to the extreme.

“There’s a huge amount of innovation in the design and build of the AC75 – more than we saw in the AC50s in Bermuda,” said Bernasconi. “We haven’t been conservative in any aspect of our design; it’s not long until we need to commit to the design of our second boat, which we will ultimately race in the 2021 America’s Cup, so we need to test as many of our ideas as possible in the yacht we’ve launched today.”

Identical key parts for the AC75 have been supplied to all the teams including foil arms, the foil cant system and the rigging. Aside from basic constraints such as length and hull shape, the rest is up to the discretion of each team. Any shrouding of the yachts in the 36th America’s Cup is prohibited so teams won’t be able to hide their designs and developments.

The foil arms, built at Persico Marine in Italy, are the result of a project led by Luna Rossa Challenge with the collaboration of all the America’s Cup teams and New Zealand based composite engineering consultancy Pure Design and Engineering. Each 4.5 metre long carbon foil arm has a wing attached to its tip which will be custom designed and built by each team. The electronic and hydraulic foil cant system was designed by Emirates Team New Zealand and distributed to all teams earlier in the year.

Emirates Team New Zealand skipper Glenn Ashby believes that while the AC75s are bigger and faster than the catamarans used for the previous two America’s Cups, they will be “inherently safer”. “As with any new boat it is all about slowly getting it up to speed, learning how to sail it most efficiently, pushing the development of the designs and then putting in the hours in getting ready to race for the ACWS Sardinia in April 2020.”

The new generation of AC75 foiling monohulls will be racing in April 2020 for the America’s Cup World Series in Cagliari, Sardinia. The 36th America's Cup will take place in Auckland in March 2021.