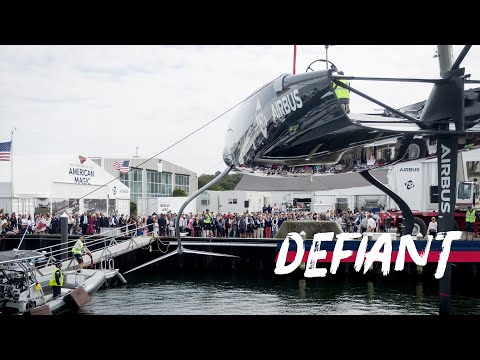 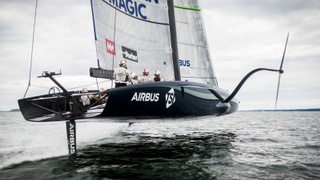 The first AC75 class boat of US America's Cup team American Magic has been launched and named Defiant.

The team's first AC75 racing boat was revealed on Saturday morning following 76,000 hours of fabrication and finishing work by the production and shore teams. It comes after the cutting-edge foiling monohull underwent initial testing on Narragansett Bay earlier last week.

The reveal of the 23 metre racing boat comes after it was transported from the team's construction facility in Bristol, Rhode Island to its sailing operations base in Newport.

A new design for the event, the AC75 is a mono-hulled boat that utilises advanced hydrofoils to sail largely above the water.

Under the rules of the event, each team is allowed to construct two AC75s prior to the America’s Cup with the competing boats racing with a crew of 11 sailors each.

Speaking about the boats, skipper and executive director of New York Yacht Club American Magic, Terry Hutchinson told BOAT International: "The special challenge of this edition of the America’s Cup is to develop a type of boat that has never been seen before: a large-scale fully foiling monohull.

"To accomplish this, there is simply no substitute for on-the-water testing, especially when combined with the latest in simulation technology."

The American Magic team previously opened a new dedicated construction facility in the town of Bristol, immediately tasked with building the two AC75 class boats for the 2021 competition.

Rhode Island has a long tradition of America's Cup boat building with the first, Vigilant, constructed by the Herreshoff Manufacturing Company in 1892-93.