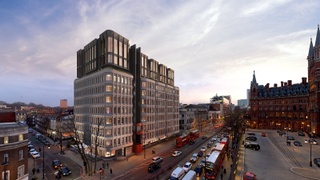 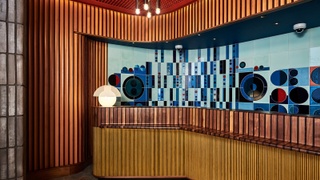 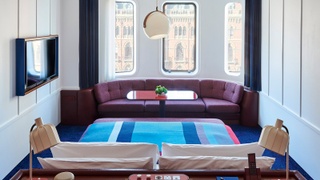 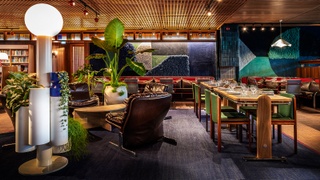 A group of super-smart, party-central hotels has shaken up the States. Now it’s London’s turn to check in, says Lucia Ferigutti

Shawn Hausman was back home in California having just completed a mammoth project in New York’s East Village – 21-floor The Standard hotel – when the phone rang. André Balazs, the founder (and at that time still chairman) of Standard Hotels, was calling to say he’d found the perfect spot for the sixth property in the portfolio, and the first outside the US.

“We were about to start thinking of the next chapter when I got a photo from André of the outside of this building, with a note saying ‘You need to come to London,’” Hausman says. The building – a beautiful, curvaceous late brutalist concrete block from the 1970s sitting right across from London’s St Pancras International station – was at that point still the Camden Town Hall Annexe. “Just [that] in itself was exciting,” Hausman continues. “We decided we needed to settle in London to properly do the project, and we figured it would be an adventure, the first time living in Europe.”

They estimated their British stint would last 18 to 24 months. Fast forward five years and Hausman and his team are only now ready to pack their bags, as the much-anticipated, 266-room, eight-storey The Standard, London finally opens its doors this month.

Injecting a dose of American cool is what the company has become known for over the years. As well as being responsible for several Standard properties, Hausman was also behind the acclaimed SubMercer in New York, Le Diplomate in Washington DC and Los Angeles’ most talked-about celebrity hangout, Chateau Marmont.

This time, he chose to bring a bit of California’s outdoor lifestyle to the capital. In the ground floor restaurant Hausman wanted an “inside/ outside feeling, and to bring the garden inside the building. There’s also a deck in the terrace outside each room on the eighth floor, with an outdoor tub that allows you to look at the view.”

Hausman is keen to point out that each Standard project is very different, so there is no cookie-cutter approach in the design. For London, all lighting and furniture was custom-designed and based on vintage pieces. The colour palette is bold and unapologetic, designed to offset the greyness of the exterior, and of the British skies: combinations of red, blue and purple in the rooms; pink, green and black in the bathrooms.

Textiles are important throughout – carpets in particular are standout features. The concept for their design was “an archaeological dig of patterns from the period of the building” and they are “the thread that links everything together. We have three different carpets to match the different types of room, and then two different corridor carpets, which are the one decorative graphic element in those areas.”

The nautical world also provided inspiration for the interiors, specifically mid-century cruise ships designed by Italian architect and furniture designer Gio Ponti. “I like his work in general,” Hausman says, “and I was always very intrigued and inspired by 1960s houseboats. That was an early influence for me.”

Nods to the past are present throughout. In the rooms, original ceilings have been left exposed, porthole-style windows have not been altered and the furnishings have been designed to match, especially rounded cabinet doors and handles. When Hausman first visited the building, the ground floor was occupied by a library – which inspired the design for the lobby. He and his team chose to recreate “what the library we would have liked to have discovered looked like, rather than the existing one, which wasn’t very aesthetically pleasing”. Instagram-perfect bookshelves have been placed alongside the walls, and they added a café, bar and even a sound lab, which will act as a live recording studio. It being The Standard, a programme of events, live music and general naughtiness is clearly on the agenda.

Now that the bags are packed again, what’s next for Hausman and his team? “A couple of California-based projects,” he says, including a small hotel in Palm Springs set to open soon. Then there’s a bit of a break – although it’s hard to imagine they will be still for long. When asked about dream projects, there is no hesitation: “I love the idea of doing something in space.” Start watching the skies...

La Dolce Vita: the best hotels on the Amalfi coast